Article 19 of the Indian constitution 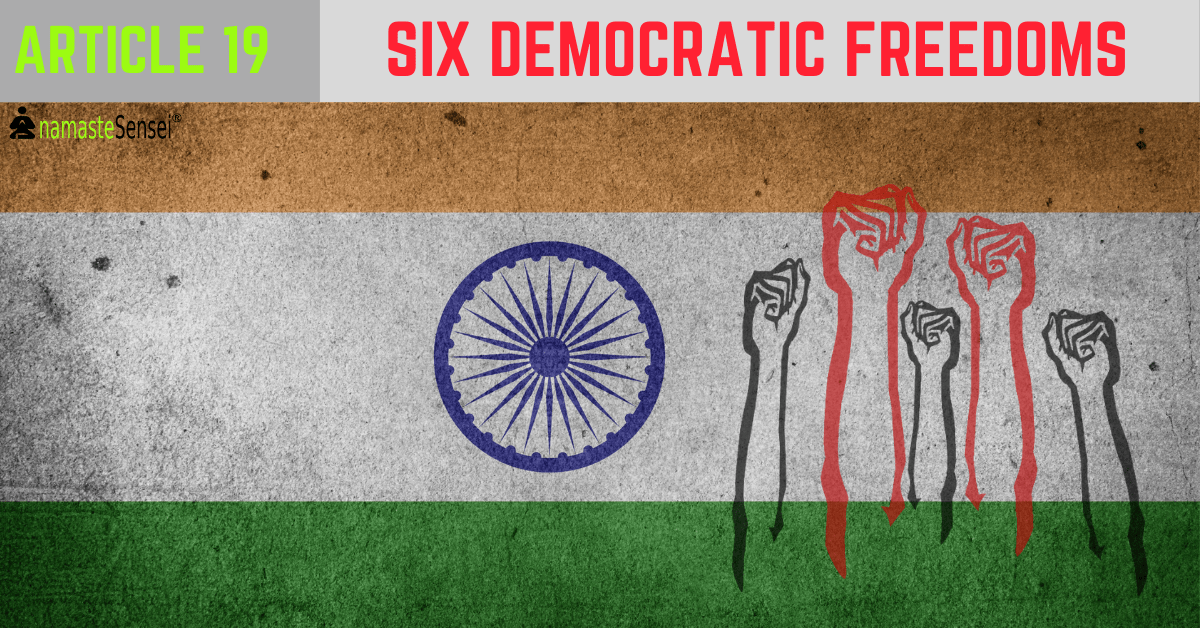 NOTE: Article 19(1)(f) Right to Property got removed along with Article 31 from the list of Fundamental Rights & is made as a constitutional Legal Rights under Article 300(a) 44th Amendment Act 1978.

What is article 19 of the Indian Constitution?

Article 19 of the Indian Constitution provides six democratic freedoms to an individual including the right to freedom of speech and expression as one of its freedom.

Article 19 1 a Guarantees to all citizens, Right to Speech & Expression. After Article 21, Article 19(1)(a) has undergone the most liberal interpretation from the Supreme Court.

The right to Freedom of Speech and Expression has the following meanings.

Freedom of Speech & Expression can be restricted on grounds of Security & Sovereignty of India, maintenance of Public Order, etc.

There are so many rights that are derived from Article 19(1)(a).

2. Running press is also a right to freedom of speech and expression and it is also a derived right.

3. Right to Information is another derived right. It is used to access information from the state, that is why the state comes with the RTI act.

All rights are interpreted by the Supreme Court.

The right to Freedom of speech and expression is very important. Otherwise, what a person can do, if he cannot say something that he feels.

Question: Is hosting a flag of Pakistan is unconstitutional?

Answer: Unless & until it is affecting the integrity of the country it is not, just hosting may not be unconstitutional.

However, if that is actually a symbolic way of showing your hate towards India then it is unconstitutional.

Even if the flag is hosted to convey your disaffection to India is unconstitutional as well.


As India is a democracy, so political descent is also a Fundamental Right in India.

Political descent means to disagree with the government.


Fundamental rights including the Right to freedom of speech and expression are always with you. No matter which country you go to. They are provided by the Indian State.

When the right to freedom of speech & expression can be restricted?

When you do something unconstitutional.

If we have a war with Pakistan & some people are hoisting the flag of Pakistan in India during wartime. Those people can be arrested & their Right to Freedom of speech & expression can be restricted.

There can be other instances as well when the right to freedom of speech and expression can be restricted.

I hope you like the Explanation in green box provided for easy understanding. Now lets dive into next article which is Article 19 1 b.

Article 19 1 b Guarantees the right to Assemble including the right to hold meetings & carrying out processions but only in peaceful ways.

Next article is Article 19 1 c of Indian Constitution.

It Guarantees to form of associations of any type.

Also, the 97th Amendment Act 2011 brought the RIGHT TO FORM COOPERATIVE SOCIETY within the scope of Article 19(1)(c).

However, the right to form Trade Union does not imply having a Fundamental Right to Strike.

Though the Right to strike may be a legal right but it is not a Fundamental Right.

Supreme Court in 1998 held that Bandh or Shut down is illegal as it involves elements of force & disturbs public disorder.

The right to strike can be a Legal Right but is not a Fundamental Right.

The bandh is illegal because it is a violent version of the strike and is not in the scope of the right to freedom of speech and expression.

Exception: Article 33 empowers Parliament to impose restrictions on RIGHT TO FORM ASSOCIATION available to Security Forces for the interest of the nation.

Using this Parliament passed the Navy, Army, Airforce & police act & denied the Right to freedom of forming Associations to these forces.

As per the Supreme Court, even Civil Servants associated with Security forces do not enjoy the Right to Form Political Association.

Next Article under this section is Article 19 1 d.

Article 19 1 d Guarantee’s right to move freely throughout India. The word free means that the right of a citizen to move whenever & wherever he wants, he can.

However, it can be restricted on grounds of:

Visiting Kashmir, one can be stopped on grounds of security.

Chandipur known for missile launch is also a place where one can be stopped, on grounds of security.


Inner Line Permit (ILP): Entry into some particular states (Arunachal Pradesh, Mizoram, etc), you need to take permission prior if you want to go to such places.

This is generally done to avoid economic activities in those areas.

In Andaman & Nicobar island. There is a particular tribe called Jarawas. Tourists try to give them food and were making entertainment out of their dance which was seen as a kind of mockery.

In response to which the Supreme Court directed the government to permanently close the road so no one can go there.

People were going to those areas which were inhabited by Primitive Tribes and disturbing their way of life.

The then, government policy was simple that we should not go intentionally & disturb them.

At other places, people can go anywhere provided they should not disturb the public order.

Article 19 1 e Guarantees to all of the citizens freedom of residence & settlement.

NOTE: Article 19(1)(f) Right to Property got removed along with Article 31 from the list of Fundamental Rights & is made as a constitutional Legal Rights under Article 300(a) 44th Amendment Act 1978.

The state can impose restrictions on it by even completely banning a profession or taking over a business completely or partially in Public Interest.

However, doing something illegal like Drug Trafficking is not a right to freedom of vocation.


The nationalization of banks was done many times after independence. However, this was done because banks were not providing loans to people who were meant to be served.

So the nationalization was not an encroachment of their right to freedom of vocation of jobs.


Even as a butcher, slaughtering is one’s job. But a ban is there on slaughtering a bull and bullocks below the age of 16 years.

NOTE: Explanation is for understanding only.

Greetings, we had covered Article 19 of the Indian Constitution. If you have any doubts or queries, feel free to leave a comment below. We will respond as soon as possible.