The preamble of the Indian Constitution 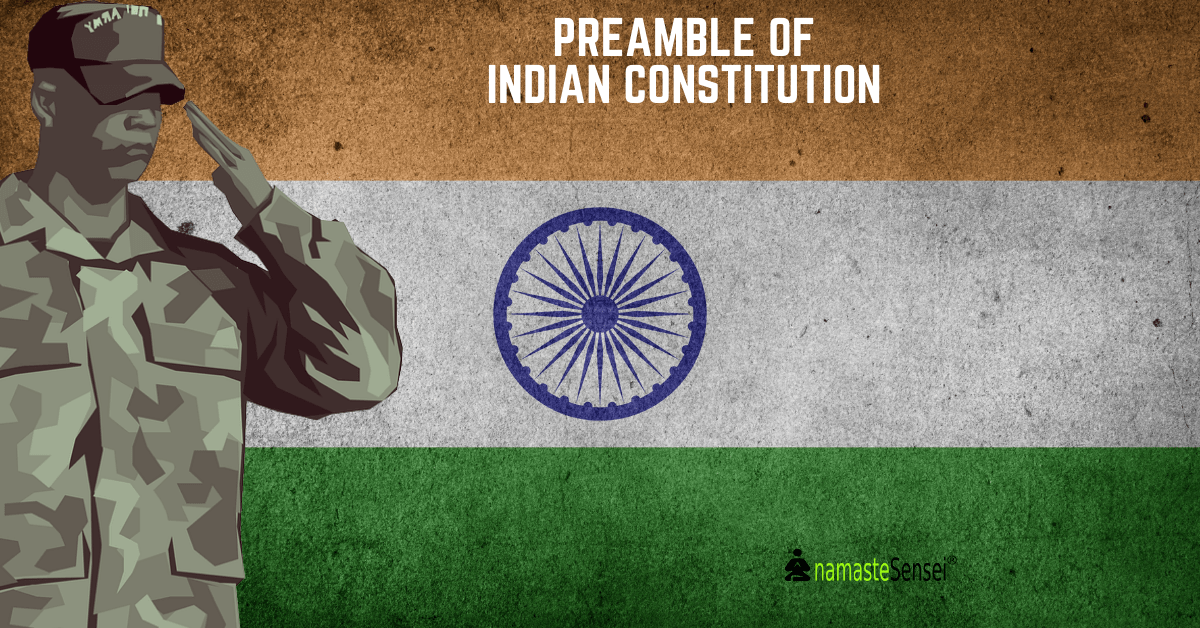 Preamble of Indian constitution states that:

WE, THE PEOPLE OF INDIA, having solemnly resolved to constitute India into a SOVEREIGN, SOCIALIST, SECULAR, DEMOCRATIC, REPUBLIC and to secure to all its citizens:

EQUALITY of status and of opportunity;

and to promote among them all FRATERNITY assuring the dignity of the individual and the unity and integrity of the Nation;

The preamble of Indian constitution

The preamble of the Indian constitution is regarded as an introduction or summary of the constitution.

It declares the basic values on which the constitution is based.

It is the customary but not compulsory for a constitution to have preamble.

The unwritten constitution does not have a preamble.

The written constitution may or may not have a preamble.

Example: Government of India (GOI) Act 1935 which was a written constitution during British time in India did not have a preamble.

Question: What was the mentality of the people of the Constituent Assembly while they were framing the Indian constitution?

Answer: The members of the Constituent Assembly were clear that India should be a secular country. This means that people who made the constitution were secular in mentality as well.

However, the word “Secular” was added in the 42 Amendment Act but we were secular way before that.

For example, the Right to Religion was already one of the fundamental rights even before the 42nd Amendment act.

This shows that the philosophy of the people was Secular as well.

for example, Fundamental Rights are enforceable, while the preamble is not.

Also, the Uniform Civil Code mentioned in DPSP is not enforceable.

Nature of the Preamble of the Indian constitution:

If there is a clash between any Article of the constitution and the Preamble, the former shall prevail i.e Constitution will be given more importance.

As per the constitution if there is an ambiguity around an article of constitution then that interpretation by article may be used by court which tallies or matches with the preamble.

For Example, Article 15 says there will be no discrimination on the ground of ( caste, sex, religion, etc)

But at the same Article 15(4) provide special provisions i.e reservations for backward classes.

This way both Article 15 and Article 15(4) seem against each other.

In this case, if we see our Preamble which explicitly mentions Justice (social, economic, and political).

Hence reservations under Article 15(4) are given, after getting acknowledgment from the preamble.

Therefore, Article 15(4) was made so that backward classes can get Social Justice.

NOTE – This Explanation is for understanding only.

Purpose of Preamble In Indian constitution:

In KEHAR SINGH CASE VS UNION OF INDIA CASE 1989

The statement “constitution derives its power from people directly” got challenged.

People of India hadn’t written the Indian Constitution, then how the Constitution derives its power from people directly?

In India, the reality is that the Supreme Court wanted to give people the ultimate importance. So even if the constitution is not written by the people directly.

Still, the Supreme court wants to believe that the constitution derives its power from the people directly.

Read the statement below.

However, the court said that this statement “Constitution derives its power from people only” is a legal fiction and conclusive assumption which cannot be challenged or tested in any court of law.

Ideals And Aspirations in Preamble of Indian constitution

Preamble contains the ideals and aspirations of people of this country.

Ideals are the vision or imagination of the country.

Aspirations in the Preamble are only met if the Ideals are met first. This means that Ideals are needed in order to fulfill Aspirations.

For Example, John is from a Minority Community.

If Secularism (IDEAL) is missing in a country then there are chances that he will not get justice (ASPIRATION) if something wrong happens in that country.

It clearly meant that in order for Aspirations to be established, ideals need to be met first.

It implies that a country’s government is totally independent and does not acknowledge any other power as supreme with regard to the governance of the country.

Aspirants can read more about Sovereignty in this linked article.

Secularism means the state shall not recognize any religion as the official religion in the country i.e Indian state is neither:

a. Religious
b. Anti-religious
c. It is also not Irreligious

All religions that have made India their home have the right to coexist on the soil of India.

Aspirants can read more about Secularism by this linked article.

In India we followed democratic socialism that is achieving socialistic goals in our constitution which are:

a. Under Article 39(b) state shall take steps to provide equal distribution of material resources.

b. Article 39(c) state should take a step to reduce the concentration of wealth in fewer hands

Aspirants can read more about Socialism in this linked article.

We have representative democracy based on the one man one vote principle.

Aspirants can read more about Democracy in this linked article.

Republic is a political system where people are supreme and there is no hereditary ruler i.e head of the state is elected by people for a fixed term.

Republic means that the technical head of the state is always elected (VOTED BY PEOPLE).

Not Inherited, which is commonly seen in a Monarchy i.e Hereditary Monarchy

The concept of the Republic has been taken from France.

The Nominal head of the State of the Indian Republic is President.

The Executive head of the government is Prime Minister.

Preamble talks about the equality of status (Article 16, Article 17, Article 18).

The preamble of the Indian Constitution talks not only about Economic equality but also it talks about the social status of an individual.

For Example, Article 16(4) Provided the opportunity to the backward classes.

Untouchability is completely banned in India to bring social equality among individuals. (Article 17)

To provide Political, Economical, and Social Justice to the people.

Political Justice: Fair chance to participate in the political system of the country.


Social Justice: No social bias against any caste i.e No discrimination, Nonpractice of Untouchability (Article 15 – Article 18)

Nobody can practice economic bias.
For example, Everyone can go to Park (Rich or Poor).

There should be free legal Aid.
For example, the State should provide a lawyer to the poor who cannot afford it.

Everyone can set up the industry. Also, there should be equal wages for both men and women.

Liberty means the absence of arbitrary powers exercised by the state over an individual.

NOTE – There are some conditions for Liberty.

Fraternity is the sense of brotherhood that prevails among all the people in India. It is a must to ensure the unity and integrity of India.

Unity – To bring people together.

Congratulations! we have covered the Preamble of the Indian Constitution. If you have any doubts or queries, feel free to leave a comment below. We will respond as soon as possible.