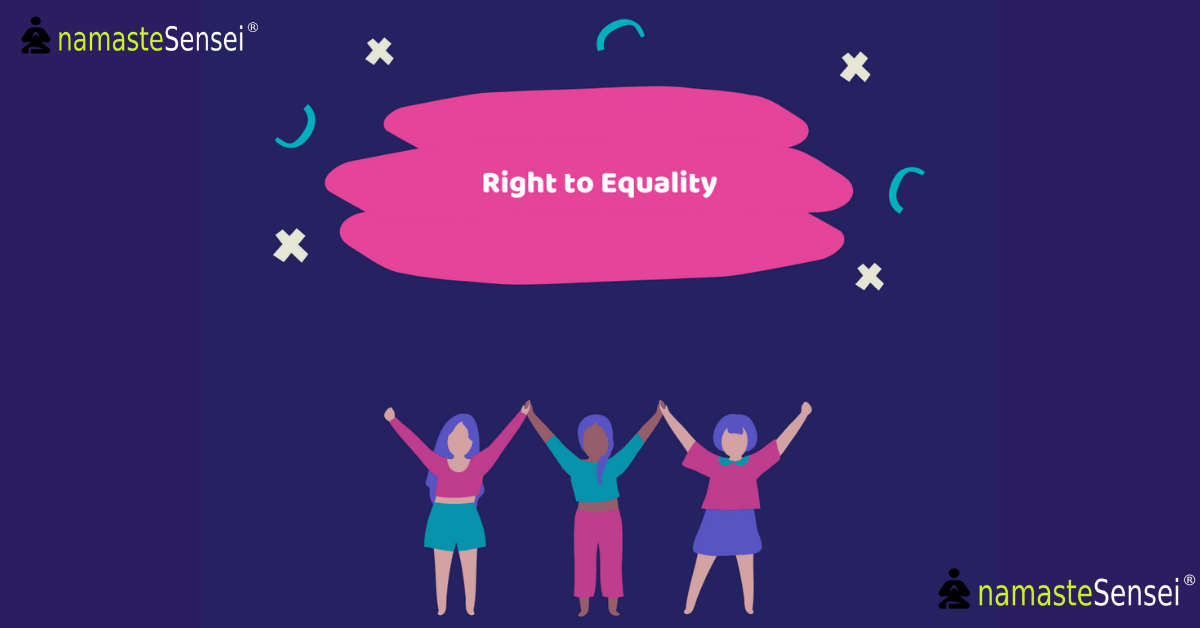 Brief description of the right to equality articles

Note – This ( * ) used along with articles indicates some conditions. Those Articles are not in absolute form, except Article 17 of Right to Equality, which is available in absolute form.

Absolute form means without any restriction.

Now, Let’s dive into the detailed explanation of the Right to equality Article 14 – Article 18 with examples

What is Article 14 of the Indian constitution?

Explanation: Equality before the law means all are equal in eyes of the law, irrespective of their social and economic status.

No special privilege should be given to anyone. In the eyes of law, everyone is alike. Otherwise, no right to equality will be there.

Exceptions to Equality before Law

Rule of Law (Law is supreme) by A.V.DICEY

Aspirants can read more about rule of law in this linked article.

Article 14 of the Indian constitution thus guarantees, Equality among equals (provided they are equal), otherwise there can’t be a right to equality.

Equal protection before law simply means that Equality among equals provided they are equal.

What this means is that everybody has different potential and caliber.

Let’s take an example to understand why sometimes discriminating among people is right.

John and Sam are the only sons of their parents. John gets good grades in school but Sam does not. Parents want Sam to be as good as John.

So they started handling Sam with more care and also allocating an extra budget for his education.

Sam is the weakest link in the family & the only way to make him at least as good as John is by providing Protective discrimination.

The right to equality is not threatened in this case.

Similarly, people from lower castes are provided reservations, so that they can reach their maximum potential.

In fact, this is why reservations are necessary to empower them and make them equal to the people from the upper caste.

If still have doubts or queries related to Article 14, leave a comment below.

Article 15 of the Indian Constitution says that states that the State shall not discriminate against citizens only on grounds of Religion, Race, Caste, Sex, Place of Birth, or any one of them alone.

In the past women were not allowed in the armed forces. Still, they are not given absolute independence as compared to men.

Isn’t it some sort of discrimination on basis of sex?

No, it is not. Well, sex was not the only reason why women were not allowed. The biological realities of women are different as compared to men. Such discrimination has nothing to do with sex.

Article 15 of the Indian Constitution orders states not to discriminate on basis of caste. But when State provides reservation on basis of Caste.

Isn’t this discrimination on grounds of caste?

Any factor beyond Religion, Race, Caste, Sex, Place of birth, or any of them alone will be considered as Protective discrimination but not discrimination.

Note that Protective discrimination is nowhere mentioned in the constitution explicitly.

So, Giving Scholarship, Reservation, Easy promotion comes under the advent of Protective discrimination.

Protective discrimination is necessary for the Right to equality.

Note- The argument is for understanding only.

Before 2006. All the Central Education Institutions (IIT, IIM, etc) which comes under the central government.

There was no reservation for OBC’s. Even the parliament was not empowered to make changes in laws, related to the reservation policy.

And then the parliament made law in reservation policy.

It is easy, isn’t it? Well if you have any doubts or queries related to article 15 just leave a comment below, we will respond soon.

Now let us see the third article of right to equality i.e Article 16

It provides for equality of opportunity for all the citizens in case of public employment.

Residence and Descent (Hereditary) were added under Article 16(2)

Is residence a ground for discrimination?

Hence, Residence became a specific criterion to deny somebody a job in some states.

You will understand it more clearly in the article below (refer: the explanation of Article 16(3))

Note – Explanation is for Understanding only.

Example – In some state services such as OPSC (Odisha Public Service Commission), people from other states mostly were not eligible to write an exam.

Reason – This is due to the linguistic barrier i.e you should have studied the Odia language which was made compulsory for OPCS and some other exam in Odisha.

This kind of linguistic barrier is generally used by states which have unique languages.

This is generally a way to filter out people. States use such barriers to provide reservations to their own people.

They are generally not stopping people to join State services but barriers like this are just a clever way to make people from other states not eligible for State PCS. This is done for other jobs as well.

So the question is who is having the power to make laws related to residence as a ground for providing jobs. Parliament or state legislature?

Answer – The Parliament is empowered under Article 16(3). The reason is simply that if the state legislature has been given the authority, then most of the states would have given reservation to their own people leaving people from some states vulnerable to jobs.

However, the state cannot introduce law in favour of backward classes unless two conditions are met.

In 1978 Prime Minister Morarji Desai gave Mandate to Mandal Commission which was established in 1979.

The mandate was to “identify the socially or educationally backward classes” of India and what measures should be taken to raise their status to ensure their right to equality.

Around 3000 classes were identified which were backward and the Mandal commission told that they should be given reservations.

Later VP Singh came to power and with some effort in 1990, they provided reservations for OBC’s. The reservation provided to OBC’s was around 27%. This is done by Article 16(4).

Later on, somebody contested against the reservations for OBC’s which led to the rising of a famous case i.e Mandal Case also known as Indra Sawhney Vs Union of India Case (1992)

Argument – As it is being said the state cannot give reservation more than 50% to overall Backward classes(OBC, SC, ST).

But the Tamil Nadu government is giving reservations of around 68% to its people. On what ground it is justified then?

Well, the reason is that the composition of Backward classes (OBC, SC, ST) in Tamil Nadu state is high. So it is justified to give more reservations to them on such grounds.

If there is only 1 Seat?
eg: Position such as Director-General of some XYZ institution. Then the seat is going to be unreserved.

People who lost privileges because of the Indra Sawhney Case were:
1. Creamy layer (OBC)
2. SC/ST in the promotions because previously they were getting reservations not only in selection but in promotions as well.

However, Parliament reacted to the judgment of Indra Sawhney’s case via Article 16(4a) described below.

Article 16(4a) is a perfect example that in a country like India, neither Parliament nor Judiciary is supreme.

Parliament – Firstly, extended reservation to Backward communities even in the promotion.

Judiciary – Declared that Reservations in Promotion is Unconstitutional.

Parliament – Now again used its power and brought the 77th Amendment Act which specifically wrote in the constitution, Reservations even in the promotion are valid. A new provision inserted Article 16(4a).

Judiciary – Allowed Article 16(4a). But Judiciary has the power to nullify the amendment itself.

But this is the maturity of Indian Democracy that there is never an ego clash between the Parliament and Judiciary. As they always look forward to the larger interest of the nation.

Residence can become ground for reservation as we have seen under Article 16(2) and Article 16(3). Similarly, can we give reservations on the basis of religion?

Answer – Yes, for example, institutions such as Temple, Church, Gurudwara, Mosque, etc which comes under the Government premises i.e Funded by State.

Question – Isn’t it a kind of discrimination with respect to public employment?

No, It is not discrimination. It is a kind of extra qualification to protect the interest of all religions. It even ensures the right to equality.

Court retaliated against the reservation policy saying that the Reservation Policy will be valid only if it satisfies the following five requirements:

Now lets move to the final article of right to equality which is Article 18.

Any title given cannot be used in prefix or suffix with the name.

The title given is not a title to the person but is a recognition of one’s work in a particular area.

Using it along with name will be a violation of Article 18 of the right to equality.

Example: Dr. (Doctor) Col. (Colonel) are not illegal if used along with the name.


Question – Can someone accept the title from another country?

Answer – Yes, provided they have permission from the State. But still one cannot use it along with the name.

Congratulations, you have finished article 14 to article 18 of the Right to equality. If you have any doubts or queries, feel free to leave a comment below. We will respond as soon as possible.