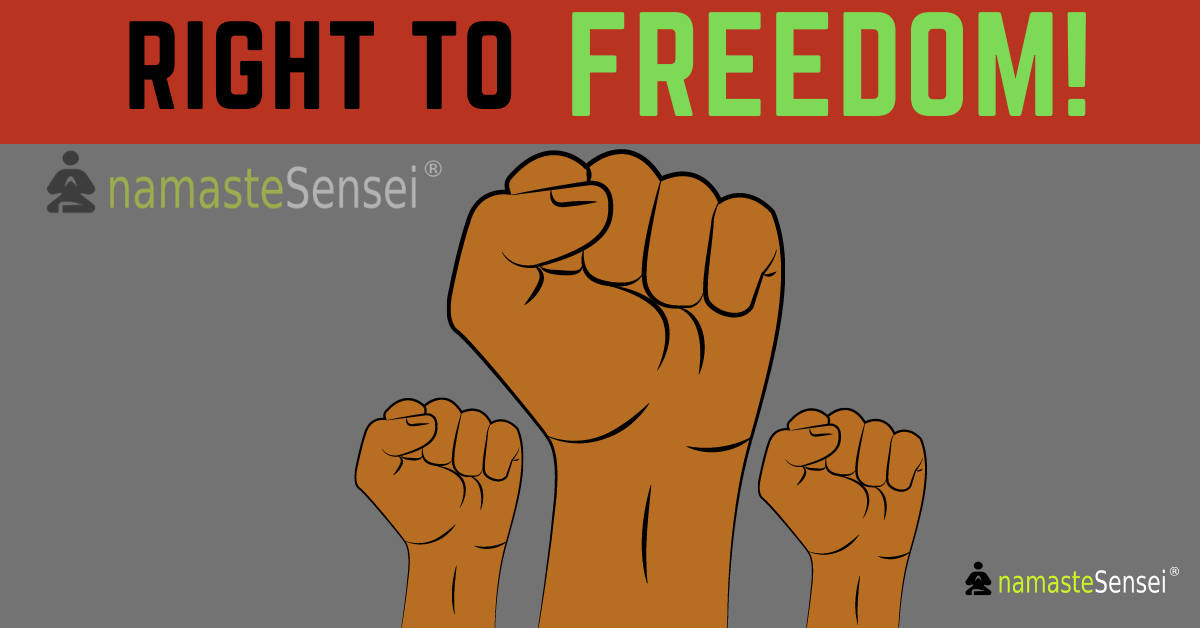 Brief description of the right to freedom articles

Let’s move forward into explanation of the right to freedom Article 19 to Article 22.

The right to Freedom of Speech and Expression has the following meanings.

There are so many rights that are derived from Article 19(1)(a).

2. Running press is also a right to freedom of speech and expression and it is also a derived right.

3. Right to Information is another derived right. It is used to access information from the state, that is why the state comes with the RTI act.

All rights are interpreted by the Supreme Court.

The right to Freedom of speech and expression is very important. Otherwise, what a person can do, if he cannot say something that he feels.

Question: Is hosting a flag of Pakistan is unconstitutional?

Answer: Unless & until it is affecting the integrity of the country it is not, just hosting may not be unconstitutional.

However, if that is actually a symbolic way of showing your hate towards India then it is unconstitutional.

Even if the flag is hosted to convey your disaffection to India is unconstitutional as well.


As India is a democracy, so political descent is also a Fundamental Right in India.


Fundamental rights including the Right to freedom of speech and expression are always with you. No matter which country you go to. They are provided by the Indian State.

When the right to freedom of speech & expression can be restricted?

When you do something unconstitutional.

If we have a war with Pakistan & some people are hoisting the flag of Pakistan in India during wartime. Those people can be arrested & their Right to Freedom of speech & expression can be restricted.

There can be other instances as well when the right to freedom of speech and expression can be restricted.

The right to strike can be a Legal Right but is not a Fundamental Right.

The bandh is illegal because it is a violent version of the strike and is not in the scope of the right to freedom of speech and expression.

It can be restricted on grounds of:

Visiting Kashmir, one can be stopped on grounds of security.

Chandipur known for missile launch is also a place where one can be stopped, on grounds of security.


Inner Line Permit (ILP)– Entry into some particular states (Arunachal Pradesh, Mizoram, etc), you need to take permission prior if you want to go to such places.

This is generally done to avoid economic activities in those areas.

In Andaman & Nicobar island. There is a particular tribe called Jarawas. Tourists try to give them food and were making entertainment out of their dance which was seen as a kind of mockery.

In response to which the Supreme Court directed the government to permanently close the road so no one can go there.

People were going to those areas which were inhabited by Primitive Tribes and disturbing their way of life.

The then, government policy was simple that we should not go intentionally & disturb them.

At other places, people can go anywhere provided they should not disturb the public order.

NOTE: Article 19(1)(f) Right to Property got removed along with Article 31 from the list of Fundamental Rights & is made as a constitutional Legal Rights under Article 300(a) by 44th Amendment Act 1978.

However, doing something illegal like Drug Trafficking is not a right to freedom of vocation.


The nationalization of banks was done many times after independence. However, this was done because banks were not providing loans to people who were meant to be served.

So the nationalization was not an encroachment of their right to freedom of vocation of jobs.


Even as a butcher, slaughtering is one’s job. But a ban is there on slaughtering a bull and bullocks below the age of 16 years.

Three types of protection against the collective power of state.

Ex Post facto means if someone has done something which is declared illegal at a later time. Then the person cannot be punished retrospectively.

Retrospective means looking towards the past.

The person cannot be punished because in the past it was not the law.

Right to freedom Article 20(3) says that nobody can be forced to provide evidence against himself.

Rohit Shekhar claimed N.D Tiwari as his biological father which N.D Tiwari was not accepting. Later the court asked for the DNA Test.

N.D Tiwari rejected the appeal for DNA test & he claimed that it is a violation of his Right to freedom under Article 20(3).

However, the court said it is not a violation of Article 20(3). The DNA test is ordered to acknowledge the person who has filed a complaint & to respect his dignity & right to life.


Another instance is related to Nacro Analysis where the person is given a drug, to get him into a semi-conscious state. This was done usually to reveal the truth.

Many people objected against Nacro Analysis stating that, when we say something in a semi-conscious state, it can be used against us.

But the Court replied that the statements given are not meant to be taken as evidence, it is just to lead to the truth.

NOTE: Explanation is for understanding.

Any doubts, Leave a comment below. Now let us move on to the third article of the right to freedom which is Article 21 – Right to Life.

There are two concepts that we need to understand with respect to Article 21.

1. Procedure established by law.
2. Due process of Law.

Aspirants can read more about the Right to life by this linked article, Article 21 Right to Life.

Now here comes our final Article in the Right to Freedom Section which is Article 22.

Aspirants can read more about Article 22 in this linked article.

Congratulations, you have finished Article 19 to Article 22 of the Right to freedom. If you have any doubts or queries, feel free to leave a comment below. We will respond as soon as possible.