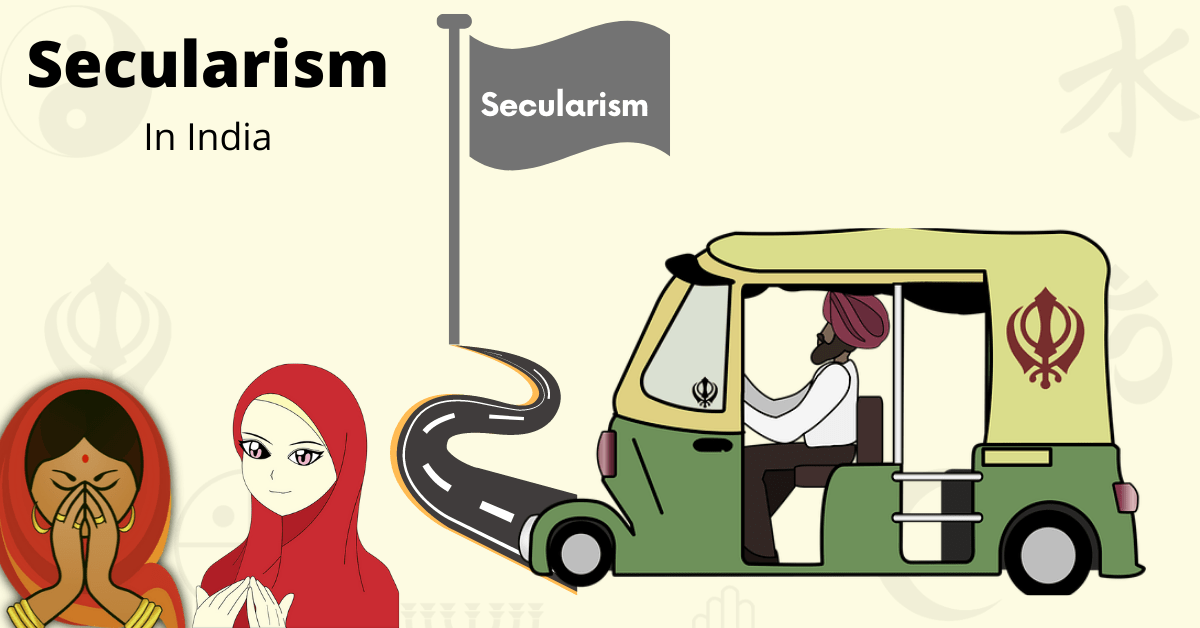 Secularism in India means the state shall not recognise any religion as official religion in the country i.e Indian state is neither:

a. Religious
b. Anti-religious
c. It is also not Irreligious


Anti-Religious means – Opposition to the religion of any kind.

For Example, China is one of the world’s least religious nations so far.


Why India is not irreligious?

India has given the freedom to its people for practicing their religion.

For Example, wearing Kripaan or Cross in order to profess religion is allowed under Article 25 and is given as a Fundamental Right in India.


Instead, we can say that India is Non-Religious which means that the state will not attach & detach from a particular religion. But will serve all religions equally.

For Example, Haj Subsidy, given to Hajj Pilgrims by the Government of India.

Government funding for arrangement in Kumbh Mela, Amarnath Temple, etc, and many more.


In India, the state does not have an attachment to any particular religion but still is serving all religions equally.

All religions that have made India their home have the right to coexist on the soil of India.

Is India a Secular country?

Yes, India is a secular country.


Provisions that ensure that secularism is followed are:

1. No discrimination on the basis of Religion.

2. No state Religion. ( that is State will not favour a particular religion )

3. State will favour all religion.


In Indian Secularism, the state favours all religion alike.


But In Western Secularism, state favours no religion at all.

This means that in the west –

“The state is allowed to curtail the rights of citizens if the religion is causing hindrance in the functioning of the state.”


Uniform Civil code ( under Fundamental Duty ) is part of Secularism in India?

We know that there are certain instances where we have seen cruelty against women in the name of religion.

For Example, Triple Talaq was practiced widely among Muslims in India.

In respect of which Muslim Women (Protection of Rights on Marriage) Act, 2019 was passed by Parliament of India and later on declared unconstitutional by the Supreme Court of India.

So the question is whether the Muslim women were happy with Triple Talaq?

Many things that come under the advent of religion are very sensitive matters.

And the State does not want to touch such matters without general consensus.


Another example is Sati Pratha was practiced widely in Hinduism till 19th Century. It was banned during the British rule & is still banned in India.

This all can be achieved with the help of the Uniform Civil Code (UCC).

If the exploitation of women is allowed then how can we are following Secularism!

There is a huge difference between having a fault in religion and a fault in the practice of religion. They are not similar.

Even without the Uniform Civil Code, we are Secular. Adding it will strengthen the Secularism of this country by removing discrepancies from religions.


Congratulations! we have covered Secularism in India. If you have any doubts or queries, feel free to leave a comment below. We will respond as soon as possible.