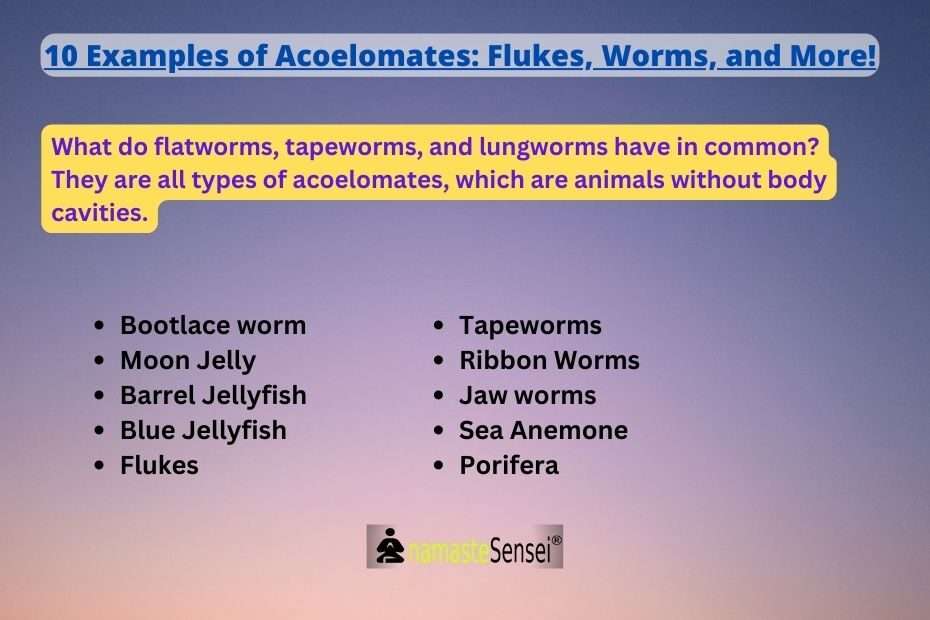 What do flatworms, tapeworms, and lungworms have in common?
They are all types of acoelomates, which are animals without body cavities.

Acoelomates are animals that lack body cavities, such as the digestive tract and coelom. They include animals like earthworms, leeches, flatworms, tapeworms, and flukes.

10 Acoelomates Animals Examples are given below.

The bootlace worm is an acoelomate. It is a soft-bodied marine invertebrate in subclass Nemertea. It lives in shallow water on sandy or muddy bottoms. The marine worm has no internal body cavity like an arthropod or mollusk; it has digestive organs surrounding its body like a string of beads.

The worm can extend out to 4 feet long but spends most of its time buried in the sand with only its small eyes poking out above ground level to search for food at night. Their bodies are made up mostly of muscles that allow them to bend their bodies into U-shaped corkscrew shapes when attacking prey—or hiding from predators.

You don’t have to go fishing for a moon jelly to see one of these amazing creatures. This jellyfish is known for washing up on our shores. The moon jelly is an example of an acoelomate because its body lacks both an endodermis and an exodermis.

The barrel jellyfish is an excellent example of an acoelomate. Although it is not a true jellyfish (because it does not have tentacles) but instead classified as a hydrozoan. The best place to spot a barrel jellyfish?

The Gulf Coast waters off Florida in warmer months where they congregate in such great numbers that they sometimes clog fishing nets as fishermen cast their lines into deeper waters. These barrel-shaped jellies use their long stinging cells—or nematocysts—to catch prey while they themselves are largely immune to harm from most predators. While humans can be stung by these tiny harpoons, these painful injuries aren’t typically serious enough to be life-threatening.

Instead of being individual creatures with organs and tissues working independently to keep them alive, they are parts that function as part of a greater whole. In their case, they’re special types of polyps specialized for certain jobs like stinging or swimming that work together in coordination to keep the animal functioning correctly.

Also known as trematodes, these flatworms are acoelomate.
Examples include liver flukes (which infect human livers) and blood flukes (which can cause schistosomiasis in humans). Acanthocephalans also fall under this category of organisms. What is an acanthocephalan? Read on to find out more about these disgusting parasites.

One of the most famous examples of acoelomates is tapeworms. These scary parasites latch onto our guts and suck out as many nutrients as possible—including some that we might need.

If a tapeworm gets too big for its britches (and intestines), it can physically split in half so both parts can keep growing. You’d think something with such a distinct advantage would easily take over all our guts, but healthy adult humans typically only have one or two in their bodies at once.

Characterized by a long body with rings (ribbons) that are set off one another at intervals along its length. Ribbon worms are acoelomate—their body cavity is an open system that isn’t partitioned by mesoderm into compartments. In their early stages of development, they have ciliated swimming larvae.

Unlike flatworms, however, ribbon worms have a centralized gut located just behind their brain; for them, digestion occurs both dorsally and ventrally.

There are hundreds of species in a group called jaw worms that dwell exclusively in fish mouths. Although they look like big fat worms, they’re actually more closely related to humans than to our tube-shaped cousins.

They have mouths but no anus or other openings—and adults live out their whole lives within their hosts’ mouths. Many jaw worms are parasites that feed off of their host’s tongue (or inner lips). The famous Portuguese man o’ war (not technically an animal!) is a rare example of a free-living jaw worm species.

The sea anemone is a simple acoelomate. It lacks circulatory or respiratory systems and has only one opening that serves as both its mouth and its anus.

The sea anemone is also relatively immobile because it’s rooted to a rock or other firm surface in order to prevent being swept away by waves. Sea anemones’ tentacles can sting their prey (and predators) when they detect movement nearby.

Whether you call them sponges or poriferans, these acoelomate animals have no body cavities. Instead, most have a jelly-like substance filling their bodies (called mesohyl), with some sort of internal skeleton-like structure (sclerites).

They may be sessile—they don’t move around—or they may anchor themselves in place using root-like filaments called rhizoids. Most also feed by passing water over their surface and digesting any organic matter they find in it. Although they are low on many lists’ lists of desirable pets, they do offer several advantages that make them suitable for research purposes—the biggest being how easy it is to grow them in labs.

Congratulations, you have read the complete article about 10 Examples of Acoelomates Animals
If you have any doubts or queries, feel free to comment below. We will respond as soon as possible.