What Is Polyploidy in Biology? Definition and Examples 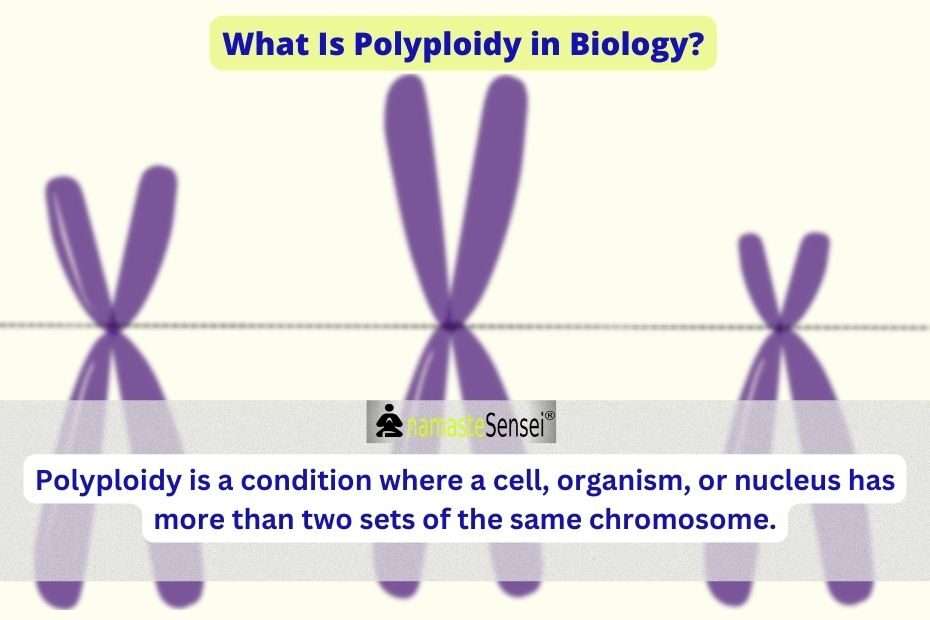 polyploidy definition biology | What is polyploidy in biology?

Have you ever heard of polyploidy? It’s one of those scientific terms that seems complicated, but once you understand the basics, it’s quite straightforward to remember. Here’s everything you need to know. This article answers the question, What Is Polyploidy in Biology?

What is polyploidy in Biology?

Polyploidy Definition Biology: Polyploidy is a condition where a cell, organism, or nucleus has more than two sets of the same chromosome. The most common type of polyploidy is when an organism has three sets of chromosomes, but there are other types as well.

However, some organisms are polyploid, meaning they have three or more complete sets of chromosomes – that’s 92 chromosomes in each cell instead of just 46! This may seem odd at first, but there are many reasons why an organism might be polyploid, including normal cell division or hybridization between species.

Let’s take a look at the types of polyploids.

Polyploidy is a condition of cells or organisms where the number of chromosomes is more than the diploid number.

There are generally two types of polyploidy:

Autopolyploidy is one of the most common types of polyploidy. This occurs when an organism develops extra sets of chromosomes from a normal cell division.

A diploid cell divides into two identical cells that each contain two sets of chromosomes. When one cell undergoes an abnormal division, creating four chromosome sets, those chromosomes are then passed on to subsequent generations.

Autopolyploids do not form reproductive barriers with their diploid ancestors or relatives like other types of polyploids do.
An example is a wheat (Triticum), one of the most widely grown crops in the world.

Polyploids are organisms with more than two complete sets of chromosomes, which can occur naturally or artificially.

Allopolyploids are polyploids formed from the hybridization of two different species, as opposed to autopolyploids, which are produced through chromosome duplication within a single species.

Another benefit of polyploidy is that it can lead to speciation, which is when a new species is formed.

Speciation is considered one of the main forces in evolution because it leads to the diversification of organisms.

When polyploids reproduce, they may produce offspring that have different numbers of chromosomes, which can lead to reproductive isolation between species.

Plants also benefit from polyploidy because it can increase their tolerance to environmental stressors like drought.

Polyploidy is important for plant reproduction, which helps to ensure the genetic diversity of their species.

Plants rely on their sexuality to survive, therefore they need a large gene pool to allow them to be resilient against environmental stressors.

One drawback of polyploidy is that it can cause the genome to become unstable, with the possibility that the new cells may be cancerous. This is because there is insufficient time for chromosomes to line up properly during cell division.

In addition, these new cells can be sterile as they inherit two sets of chromosomes from their parents instead of one. These sterile cells are also an obstacle when trying to create hybrids, which are crosses between different species.

Another drawback of polyploidy is that having multiple sets of chromosomes can cause genetic disorders. It results in having extra copies of genes, which may lead to abnormal expressions of some traits. It can also result in the under-expression or over-expression of other traits.

Another drawback of polyploidy is that it can lead to infertility. This happens when cell division occurs unevenly, resulting in parts of an organism with too many chromosomes and others with too few.
It can also result from sexual reproduction when some offspring have twice as many chromosomes as other offspring.

Animals can also be polyploid.
For example, one of the most common types of polyploid animals is salmon. Salmon have extra chromosomes in their cells that cause them to grow faster than other fish, which gives them a competitive advantage in the wild.

However, this also means that because of their genetic uniqueness, they are unable to interbreed with other species of salmon.

Some salamanders are also diploids, meaning they only have two sets of chromosomes, one from each parent.

The reason that salamanders can be polyploids is that they can end up with an extra set of chromosomes during the process of meiosis.

A frog’s genome can be diploid or polypoid. A diploid genome has two copies of each chromosome, one from the mother frog and one from the father frog.

A polypoid genome has more than two copies of each chromosome. The extra chromosomes may come from either parent frog, or they may have been a result of a mutation in the egg cell before it was fertilized by sperm.

Congratulations, you have read the complete article What Is Polyploidy in Biology? If you have any doubts or queries, feel free to comment below. We will respond as soon as possible.